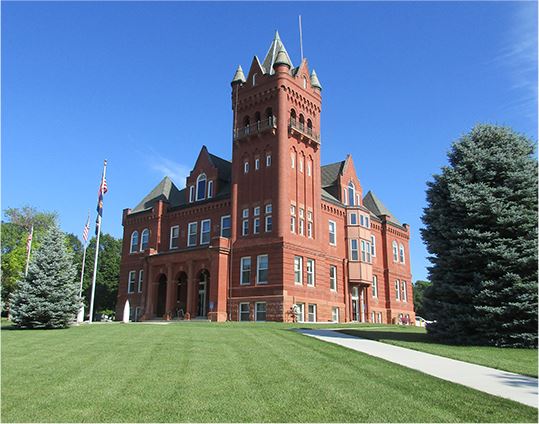 Wayne's first courthouse burned down on July 4, 1884. The day's celebrations ended at midnight when a fire broke out in the courthouse. Two men had been shackled to the floor of the Sheriff's Office for overindulgence at the celebration, and it seems likely that they had set fire to the building.

In 1899, on the site of donated property in the Town of Wayne, Nebraska, a substantial red brick courthouse was constructed in the Norman Chateau style for a cost of $32,000. Work on the structure was begun on the building August 3, 1899, and was completed on December 28, 1899.

The firm of Orff & Guilbert of Minneapolis, Minnesota provided the architectural plan. The building rests on a raised stone foundation, and is constructed of Omaha pressed brick with Lake Superior red stone trim. The walls are 18 inches thick and made of solid brick. The roof features large dormers pierced by Palladian windows. Three arches, arched windows and red stone columns decorate the south entrance porch. Above the porch was an iron rail.

View the entire history of the Wayne County Courthouse (PDF).