The History of Wayne County, Nebraska

Wayne County was organized by a proclamation of Governor David Butler in the autumn of 1870. As the County was settled, precincts were formed and boundaries defined. Precincts were named for officials, early settlers and neighborhood creeks. At the present time, there are 13 precincts in Wayne County.

The City of Wayne and Wayne County were named for the Revolutionary War hero, Anthony Wayne. General Wayne was bold and daring in planning and carrying out his strategies. His reputation seems to have inspired steadfast loyalty in his men and his friends.

Wayne State College has also played an important role in the history of Wayne County. As early as 1871, plans were made for building a college. However, those plans were not carried out. In 1891, when classes began at Pile's Nebraska Normal College, seven students enrolled. During the early days of the college, tuition was paid in eggs, milk and labor. In 1910, the State purchased the college and the name was changed to Nebraska Normal School at Wayne. Tuition was free, books were rented for $0.20 per semester, and dormitory rooms costs $0.50 a week. 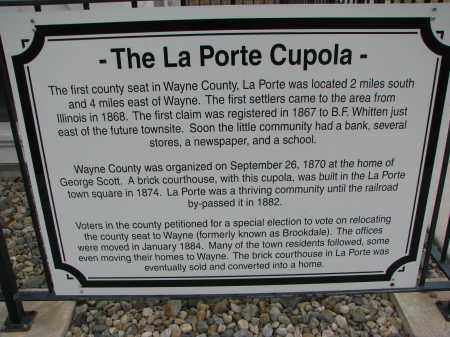 Several towns in Wayne County's early history no longer exist. LaPorte had nearly 300 citizens at one time and was home to a temporary courthouse until the railroad chose a different route. Towns such as Taffe, Logan City, Apex, Melvin, Weber, and Spring Branch no longer exist, other than in old history books and family stories.

Wayne County currently spans 443 square-miles in Northeast Nebraska, and includes the Villages of Altona, Carroll, Hoskins, Sholes, Winside, and the City of Wayne. The total population is around 9,595 people as of the 2010 U.S. Census.